Over the past 20 years, many discussions have centered on the issue surrounding fire safe evacuation elevators. I had the privilege of discussing this relevant topic with top life safety professionals at the 2013 ISC West 2013 Show in Las Vegas.


Many debates and valid points are made supporting the use of these elevators; however, there are still many misconceptions. Based on years of research, I believe that the benefits of having fire safe evacuation elevators outweigh the previously held opinions.

My post today will focus on the concept of “Fire Safe Elevators” by leveraging fire alarm systems in order to enhance and maintain survivability during an evacuation.

Generally, fire protection engineers provide for the minimum Code requirements. This minimal approach is driven by our client’s fire protection budgetary constraints and their cost vs. risk assessments. Luckily, aspirating smoke detection has evolved over the last two decades. Due to technical advances and many more manufacturers providing this solution, the cost for aspirating detection is now more affordable than ever. Providing early warning aspirating smoke detection systems in lieu of conventional spot type smoke and heat detectors for elevator detection should increase the viability of elevator evacuation during fires.

There are many benefits from both a life safety, and economical perspective, regarding the use of aspirating smoke detection in elevators. It is suggested that the combination of elevator shaft smoke management systems and an active elevator shaft early warning aspirating smoke detection will provide a significant increase in survivability for the building occupants.

There is a rising concern for the safety of persons who cannot travel to building emergency exit routes in the same manner as able persons during a fire.
Today, more than one million Canadians are over 80 years old. As our population ages, the use of stairs for many occupants in high rise buildings is not a viable option.
Enabling a person with physical disabilities to exit rapidly and safely in an emergency situation is an extremely important solution.
Fire alarm systems with early warning aspirating smoke detection in the elevator shaft can be part of that solution.

However, for more than 35 years, the elevator industry’s message has been crystal clear:

“Do not use an elevator during a fire”.

In the United States, that message was formalized in 1973 after a series of fatal fires in New York prompted change. That change also affected Canadian Codes and Standards. Prior to 1973, occupants would commonly try to exit buildings during a fire using elevators, stairs or any other available means of egress.

Evacuation of high-rise buildings has always been a subject of concern. Throughout Canada, there are signs next to elevators indicating they should not be used in fire situations; instead we state that stairwells should be used for fire evacuation. We now know that the elevator industry is taking a hard look at whether to change the “Do not use an elevator during a fire” message.

Thousands of technical papers regarding the terrorist attacks of Sept. 11, 2001 have opened the debate further. This debate is being fueled by the facts surrounding the evacuation of the World Trade Center. Many occupants, early in the event evacuated via the elevators, and many lives were saved as a result.

A “Passive System” such as standard or intelligent smoke type detection essentially waits for the particles to come to it, depending on air movement to propel the particles through the device-sampling chamber.

The problem of fire evacuation for the mobility impaired has been a topic of concern within the fire protection community for many decades. Fire protection research scientists, such as Klote & Tamura, provided a paper on the subject in the early 1990’s:

“A decade ago, the potential use of elevators for evacuation was studied in detail and despite the fact that most technical issues seemed solvable, not much progress to implement this alternative for the evacuation of occupants was made in the following years” (Klote et al. 1992; Klote & Tamura, 1991).

When an elevator car moves downward, piston effect tends to increase the pressure below the car and to reduce the pressure above the car. In extreme cases the reduction of pressure could overcome a shaft pressurization system and result in smoke infiltration of the elevator lobby or shaft (Klote, April 1988)

Full scale fire experiments were conducted at the NRC’s ten storey fire research tower near Ottawa (Tamura and Klote, 1988, 1987a, 1987b, 1987c,). These experiments verified that pressurization can provide smoke protection for the elevator system. Additionally these NIST/NRCC projects addressed the impact of pressure disturbances caused by elevator car motion on smoke management systems. In 1988, a fire experiment report concluded that elevator smoke management systems can be designed to provide acceptable levels of pressurization under several conditions of doors opening and closing (Tamura and Klote, April 1988).

We have been studying this for over 30 years!! Why has technical advancement been so limited in regards to the evacuation of the mobility impaired in high rise buildings?

The key is to develop a value engineering solution that ensures both systems inter-operate with each other while addressing the elevator’s environmental challenges.
As this historical research indicates, there is no doubt that this solution, if value engineered and commissioned correctly, would begin to be leveraged by the building community.

Studies have shown that the combination of active smoke management with active early warning aspirating smoke detection provides a significant increase in occupant survivability. A senior’s residence could market “fire safe elevators” as one of the key safety features of the facility. Insurers could reduce their liabilities and subsequently owner insurance rates due to these added fire safety features.

In 2011, research has provided new insights into the advantages of early warning aspiration detection for elevators. The transient air pressures produced when an elevator car moves up and down in a shaft is no longer a problem. Aspiration detection is now intelligent enough to “learn” these environmental changes and adjust to compensate for them. This compensation is based on “smart” heuristic decision algorithms within the detector’s processor.

In lieu of the expensive smoke management solution, we could leverage some adjacent technologies to develop a more cost effective solution for safe elevators. Perhaps a “Fire Safe Evacuation Elevator” could consist of multiple drop-down oxygen masks, similar to what we have experienced during the jet liner aircraft safety instructions before takeoff.

The elevator shaft’s early warning air aspirating detector could be utilized to trigger the drop down oxygen masks when the elevator shaft becomes contaminated with the smallest amount of smoke or invisible products of combustion in the incipient stage of the fire. This approach could be more cost effective than installing new or even retrofitting the expensive mechanical smoke management systems in existing or new high rise elevator shafts. 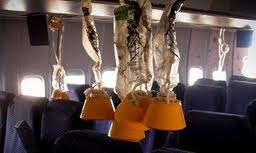 There would have to be a prescribed maintenance, check and testing plan for the oxygen cylinder located in the elevator cab. These important technical details could be worked out by utilizing what we have learned from the aviation industry.

From a 2010 National Fire Code driven fire safety plan approach, elevators can technically still operate during the very early stages of a fire. Elevator recall is not activated or the elevators are not called out of service until a fire alarm initiating device senses fire or smoke or an operator triggers activation manually within the designated levels that the specific elevator shaft serves.

Elevators can therefore potentially be used to evacuate people with disabilities within a specific stage of occupant evacuation in a high rise building.

Owners schedule a qualified elevator mechanic to attend the fire alarm annual testing on the spot type detection devices located inside the elevator shaft. Many property and building maintenance managers have indicated that this task, the code required testing of the elevator devices, is expensive. Typically two fire alarm technicians are charged out at about $1,500 per day. Two elevator mechanics is approximately $1,800 per day. On average the cost to test the building elevator shaft is approximately $3,300.

One of the benefits of air aspiration detection is that testing of the device does not require access to the elevator shaft. This is because the sampling tube travels from the detector located outside the shaft, into the shaft, and then back out of the shaft to a sampling port.
The result is no requirement for shaft access for testing.

Spot detection testing in a shaft is very time consuming, whereas with air aspiration detection the testing of a shaft would take no longer than 15 -20 minutes. Based on the above, and an installation cost of approximately $10,000, building managers would get a 100 per cent return on investment in three years.

The Stratosphere Tower Hotel and Casino in Las Vegas is equipped with elevators for emergency evacuation because the hotel rooms are situated at the top of a narrow 1,149-foot-tall tower. These elevators travel at the speed of 1,800 feet per minute. Each level of the cab can accommodate 13 people. Also, a metro station in Montgomery County, Minnesota, has elevators equipped for emergency evacuation because it is so far underground. These elevators safely evacuate tenants during emergencies and are protected from fire, heat, smoke, water, and power loss and overheating of the elevator equipment.

The architects designing the Freedom Tower being built on the site of the former World Trade Center towers announced that the building would include pressurized stairs, low-level emergency lighting, and concrete protection for all sprinklers and emergency risers.

The building’s elevators and sprinklers would be located in a central core of concrete that would be about three feet thick. A recent NIST study suggested that building size, population, function and the building’s iconic status should be taken into account in designing the egress system.

Fire safe evacuation elevators are complex. This means that a decision on the future of elevator emergency evacuation systems will not be made soon. However, the benefits are real. We now know that evacuation of a multi hundred ft. high rise office building can be accomplished in 30 minutes using elevators alone.

Elevators have started to look very appealing to developers who realize they need better ways to evacuate high rise buildings. Evolving fire alarm technology, such as air aspirating detection systems, will be a big part of the solution. Fire alarm technicians will continue to be there to ensure these systems are maintained and functioning as intended.

Now that’s something to think about the next time you’re riding the elevator.


Do you see a future with Fire Safe Evacuation Elevators? Let me know.

Director of Research and Industry Affairs


Keep up to date with changes in the life safety industry. Sign up for the Mircom Group of Companies newsletter today.